We love using ricotta in our vegetarian lasagna, as a spread on bruschetta with lots of fresh herbs, sea salt, a squeeze of lemon and good olive oil, and also as part of next-level cheesecake. Try ricotta pancakes, and fresh berries with ricotta drizzled with honey for snack – lots of delicious uses! Homemade ricotta is very easy to make, and the flavour and texture is so much better than store bought, especially when made with our all natural Liquid Nigari available in our online shop or in the US on Amazon.com. 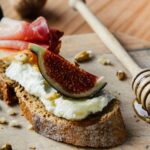 We made two versions of ricotta, one using goat’s milk, and the other cow’s milk. Adding the Nigari at a higher temperature (200F, almost to boiling point) at the same time as a bit of sea salt accelerated the formation of curds.

Organic milk is great to use, but only if you can find non-UHT (ultra-pasteurized) organic milk. In our cow’s milk ricotta version, we recommend substituting one cup of milk with heavy or double cream instead. The higher fat content creates big, beautiful curds.

Both recipes use the exact same procedure, and the only difference is that we used half a tbsp more Nigari in the goat’s milk recipe (maybe because goat’s milk has less lactose than cow’s milk). Our chef found the cow’s milk make a better ricotta for melting, it got somewhat chewy and crispy compared to the goat that melted a bit more.